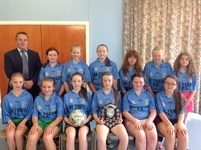 Congratulations to our P7 girls who represented Derry in the Allianz Cumann na mBunscol Football Ulster Championship on Wednesday 6th April. The girls won their first two games, defeating the Armagh champions, Derrynoose and the Tyrone champions, Carrickmore. This enabled them to progress to the semi-final, where St Trea’s defeated Kinawley from County Fermanagh. In the other semi-final Tyrone defeated Kilmacrennan from County Donegal, resulting in a County Tyrone, County Derry final. Sadly our girls lost the final by one goal to Carrickmore. We would like to congratulate Carrickmore on securing their second Ulster Championship in two years. We would also like to congratulate our girls who were marvellous throughout the competition. We are delighted that a small school such as St Trea’s can successfully compete with much larger schools at the highest level. Well done girls - we are very proud of you!